Where automotive was once the leader in robotic uptake, the electronics industry has seen a significant rise in the adoption of robotic automation in areas such as electronic assembly. With electronics continually innovating and expanding, the need for responsive and adaptive methods of automation have increased in importance, leading to a rise in the use of Cobots.

Using Cobots, manufacturers can quickly adapt production lines to new products and processes, taking advantage of their size and safety features to reap the benefits of robotic automation across a range of tight space, repetitive tasks. 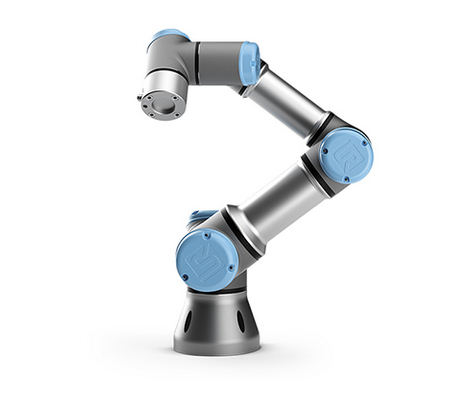 Tasks within the electronics industry require high levels of care and accuracy due to their small size and complexity. Particularly where the assembly of electronic components in concerned, PCB assembly for example, components are often small and easily displaced. With many electronic manufacturers using mixtures of automation and manual operation within assembly processes, there are vulnerabilities in product quality and potential for faults, failures and the need for rework.

In the fast-moving space of electronics manufacturing, agility and response is the key to competitiveness. Whether loading and unloading parts, assembling electronic components, testing PCB’s or packing boxes, the ability to control every section of production independently allows for rapid response to change and much quicker restructuring for changes in demand, however accuracy and quality must not be compromised. 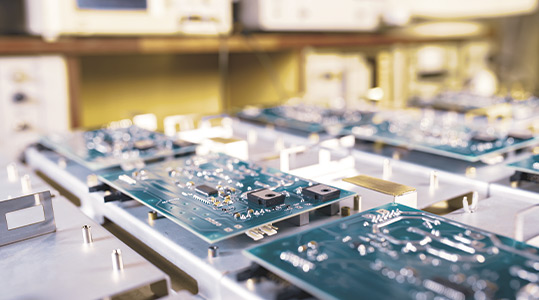 The introduction of Cobots has changed the way we view robot automation as they overcome many of the challenges previously faced. Cobots hit a perfect mid-range of payload and reach capabilities that are closer to that of a human, allowing them to be deployed across a variety of smaller, tight space processes.

With traditional automation systems using more mechanical based systems which are inflexible and vulnerable to change, newer automation methods such as Cobots bridge the gap of flexibility, allowing for easy redeployment of equipment. 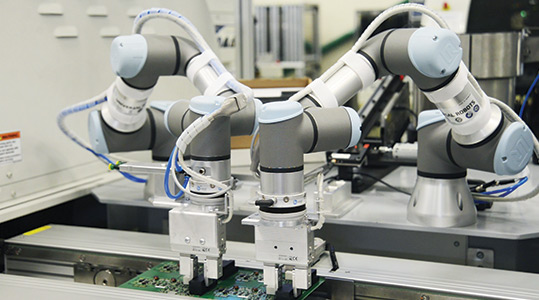 Have you considered other assembly automation? 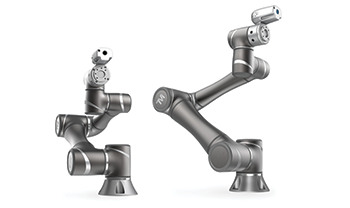 In industries where innovation is a given and products, processes and requirements are continually changing, flexibility and the ability to respond to change are increasingly important. Cobots offer infrastructural benefits to electronics manufacturers, allowing redeployment and repurposing of robotic equipment without significant reinvestment in new equipment.

With electronics now at the heart of modern society as we know it, electronical components such as Printed Circuit Boards (PCB) are playing an increasingly integral role in society. With increasing use of such electronic components, comes further demand and innovation.

Cobots support innovation through their flexibility, enabling quicker response to production changes. While hard automation is inflexible and generally just follow programs until told to stop, Cobots have built in ‘sensitivity’ in addition to external end of arm sensors, allowing them to ‘feel’. The ability to feel offers programmable force feedback, enabling greater equipment control for delicate operation. Force feedback can ensure parts are not damaged and the correct level of force is applied. 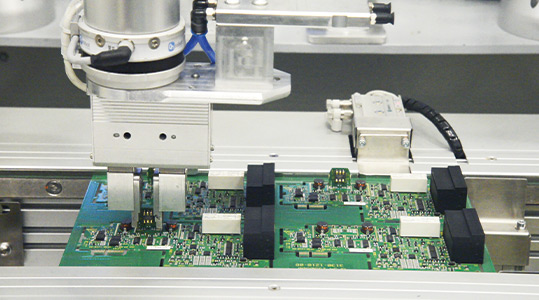 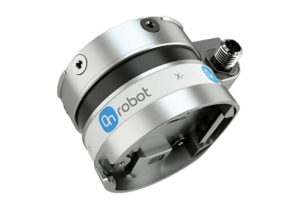 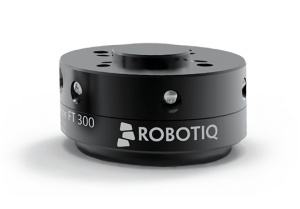 The Robotiq FT 300 is a multi-axis force and torque sensor which enables collaborative robots to perform sensitive tasks.

PCB’s, and electrical components alike, are precision manufactured items which require high amounts of accuracy and care throughout the entire production process. Building up boards with small components can be difficult as they can easily be displaced. Issues with placing components on the boards could lead to failures, decreased throughput and additional reworking.

Cobots have an accuracy of up to 0.1mm, which combined with force feedback, ensures consistent and accurate placement of parts, limiting failures, reworking and improving throughput. 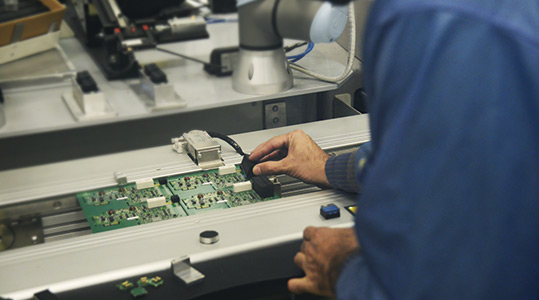 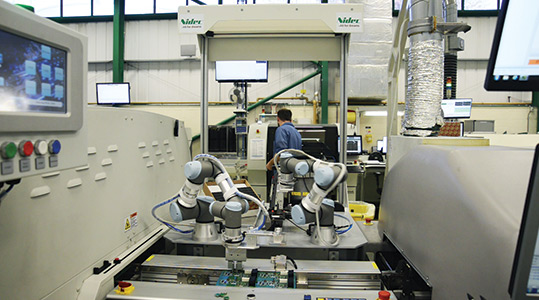 When we combine Cobot benefits such as ease of deployment, size and smart software, we are left with a highly flexible approach to manufacturing. Flexible manufacturing is becoming an area of increasing interest among manufacturers, with digitisation being the driving force in consumer and manufacturing change.

The ability to respond to changes on the demand is now becoming a competitive advantage as innovation drives new products to the market, and consumer choice influences high-mix production scenarios.

While already improving on accuracy and reliability, Cobots are also able to provide significant benefits in uptime, resulting in improved product throughput. Consistent throughput levels can allow manufacturers to better measure and forecast production results for optimisation of processes.

Connectivity, and the ability to connect the shop floor to the top floor within the ‘Internet of things (IoT) also allows for real time monitoring and data to be analysed for best performance. 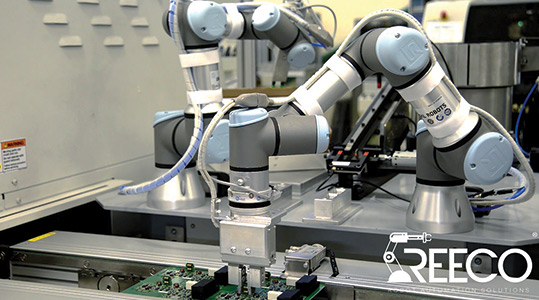 Proof of Concept Services are Available, Contact our Team.

Comprised of sequential tasks, processes and workstations, assembly lines are used to organise the flow of materials and maximise product output and efficiency. Since their introduction, robotics have been used to significantly enhance these processes, with manufacturers receiving benefits in consistency, speed and quality control. Following pre-programmed commands, assembly robots are robot arms that carry out assigned tasks within a production scenario.

As robot technology has developed, we have moved from simple two axes robots, to 6 axes which are commonplace today. Dubbed ‘multipurpose manipulators’ by the International Organisation for Standardisation (ISO), 6 axes robots are capable of articulating anywhere within its furthest point of reach. Robots excel at handling and manipulating materials, operating much like a human arm, they can complete complex series’ of movements on their own, unlike more traditional mechanical methods of automation. 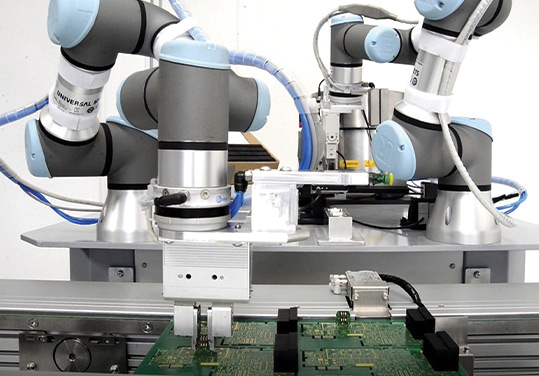 Reeco aim to provide the highest standard in service and support. From initial discussions to final installation, Reeco offer support at every stage of your projects journey, from proof of concept to sophisticated safety systems, remote access systems and bespoke service packages. 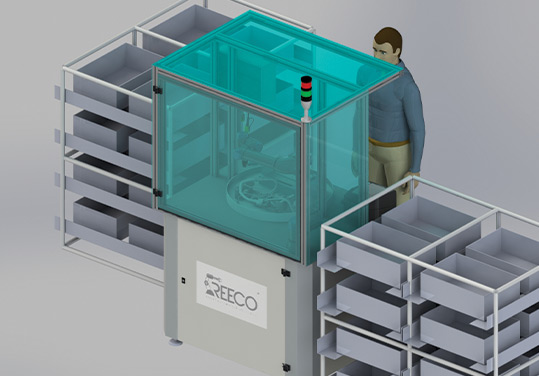 Reeco offer a proof of concept service to help validate automation ideas and provide reassurance before the beginning of your project, eliminating the need for full commitment – Proof of concepts allow us to do the thinking for you. 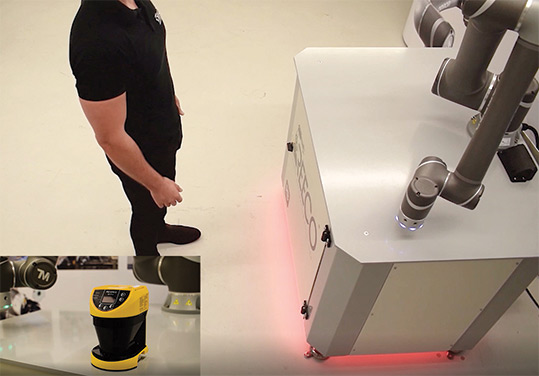 Safety is a critical part of Cobot integration and paramount to a projects success. Though Cobots are typically safer than their industrial counter parts, when equipped with tooling and additional equipment a safety reassessment is required. 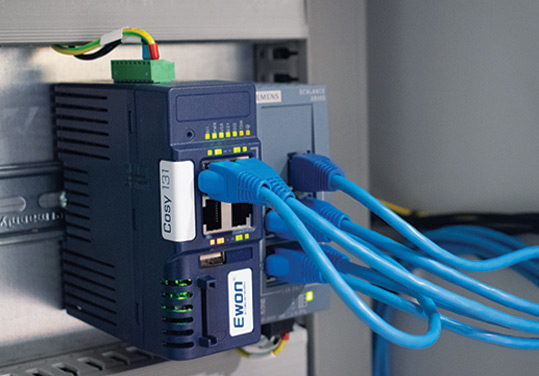