BMW is a global automotive giant, with over 130,000 employees BMW have manufacturing operations in Germany, Brazil, China, India, South Africa, the United States, Mexico and the United Kingdom. The UK has played an important role within the BMW Group with it being the only place in the world where all three of BMW Group’s brands – BMW, MINI and Rolls-Royce Motor cars are represented by manufacturing operations. The growth of BMW Group’s UK operations has been significant with the MINI plant in Oxford, the heart of MINI operations, producing MINI’s since 2001 and has produced three million to date.

Overview
Requiring a reduction in assembly time, a KUKA LBR iiwa was deployed at the manufacturers plant in Oxford to assist MINI with riveting within their crash-can assembly. The application is a true human-robot collaboration (HRC) which allows the robot and operator to work at the same time within a tight workspace. The Cobot was programmed with sophisticated safety configurations to ensure the safety of the operator whilst maintaining process efficiency. The integration of this Cobot has allowed operators to attend other processes within the manufacturing production line, ultimately providing an increase in product throughout.

The Original Process
MINI were looking for an automated solution to their riveting process in order to improve cycle times. The original process consisted of operators placing all the crash-can components on the table and then manually riveting the four rivets into the part. As this process required the operator to use a hand-held riveting tool, achieving consistent cycle times was difficult due to the accuracy and repeatability relying on the operators ability. MINI realised that they needed a solution for this process as their existing process was inconsistent and inefficient which is when they contacted Reeco. After reviewing the process Reeco realised the opportunity to capitalise on human robot collaboration and develop a system where human and Cobot could work together for ultimate process efficiency. 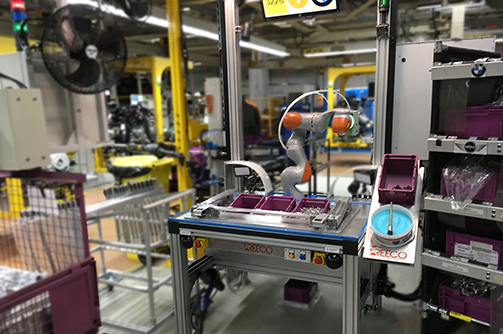 Reeco’s Solution
To alleviate the operator from the repetitive riveting process and increase product throughput a collaborative application incorporating the KUKA LBR iiwa has been developed. The application works alongside the operator, fixing rivets into place as the operator continues to work on the assembly. The operator would first load the crash-can components onto the work bench and slot the rivets into place, the cobot would then secure the rivets on one side of the crash-can whilst the operator works on the other side. The operator does not wait for a single second during the cycle even though the robot is working in the same workspace at the same time, making this process design unique to MINI’s Oxford plant.

Where operators previously had to empty their rivet guns after every 20 studs or so, the cobot now automatically dispenses of the studs into a KLT box, eliminating process down time. MINI are also able to keep track of how many rivets have been fixed through the integration of the cobot into their production system which supplies them with factory reports and machine status. In instances where rivets can’t be fixed, the cobot is able to utilise its tactile search function which senses tolerance build up allowing it to understand that a rivet may not be in a 100% repeatable position. When these instances occur, the operator can use their discretion to influence the cobot, either moving the arm away through its impedance mode, or alternatively instruct it to try again if they think the rivet is in the correct position, this gives the operator total control.

The focal point of this solution was to ensure maximum human robot collaboration within a tight working space, which meant developing a sophisticated safety concept to allow for both safe operation and efficiency. When the crash-can program was produced an additional function was created for the safety configuration of the system. The configuration utilises the KUKA’s ability to be self-aware of its location by placing itself in a virtual cage with several predetermined areas. Each area can be defined individually, for example one area could be a working space and another could be a protected space. This function, along with the ability to monitor the spaces, provides the cobot with information which tells it where it can and can’t operate, thereby preserving the safety of the operator and meeting HRC requirements ISO/TS 15066:2016.

Integration of this cobot provided MINI with a system that encompasses human robot collaboration with its unique process design. The system has enabled MINI to significantly improve their cycle times, taking them from a takt time of 64 seconds to 52. This time saving has enabled operators to attend other processes within production, ultimately providing an increase in product throughout.

Value Added To The Process