Ford is a global automotive giant, employing just under 200,000 people its the fifth largest automaker in the world, with 65 manufacturing plants worldwide. Ford operates three major manufacturing sites in the UK which manufacture petrol engines, diesel engines and transmissions. Employing over 10,000 people in the UK, Ford play an integral role in the British Automotive industry. Ford contacted Reeco to assist them with bolt fixing within the manufacturing of its engines.

Overview
Manufacturing motor vehicles, precision and accuracy are of upmost importance to Ford. Cobots can be programmed to exact measurements, making meeting production requirements like torque a simple task, as a result four UR3 Cobots have been deployed at the manufacturers plants to assist them with the bolt fixing process. With just one plant manufacturing approximately three thousand engines a day this process was highly repetitive and due to the increasing concern of RSI,  a Cobot application was perfect as the risk of RSI would be dramatically diminished after integration.

Speaking to Phil Moreton, Lead Engineer in Emerging Technologies at Ford, the sole purpose of the Cobots was to improve the jobs of their workers by reducing the labour-intensive tasks.

With this in mind the focal point of the projects was to create solutions which improved the working environment for operators whilst reducing cycle time as a means of justifying ROI. To achieve this the solutions needed to be as self-sufficient as possible due to the highly repetitive nature of the tasks.

Project #1
The original process for project 1 saw operators manually placing and hand starting 8 bolts, with a rough cycle time of 22-28 seconds dependant on the operator and which engine was being processed. The integration of a Cobot would allow for both the placement and fixing of bolts, reducing the time spent on this process and providing a consistent and measurable cycle time.

Two UR3 Cobots were deployed to assist in the bolt fixing of their petrol engine production line – UR3’s were used as their ability to work in tandem with precision and speed made them ideal for the challenges of this project. The Cobot arms were fitted to one of Reeco’s custom robot bases (RB-850) which are manufactured bespoke for each project, acting as a stable platform for the Cobot whilst housing all the electrical components and hardware required for the project. The internal hardware of the RB-850 was customised to suit the application with a purpose-built electrical panel allowing the station to communicate with the rest of the production line for full integration. The robot base also acts as a table top for any further equipment required, for this project the table top is home to two bespoke bolt feeders (Cobolt feeder) which are capable of supplying the UR3’s with bolts, making the system self-sufficient. The Cobolt system was manufactured to replace the bowl feeders and stepper feeders to utilise the Cobots down time when new parts are being delivered to the Cobot. The UR3’s are fitted with electromagnets capable of picking up bolts from a KLT box and placing them into the funnel of the Cobolt system. The Cobolt is fitted with an electro-vibrating motor which funnels the bolts into the correct orientation ready to be picked by the Cobot. The KLT box holds over 3000 bolts and does not stop production when being refilled, allowing the system to operate indefinitely providing bolts are replenished. 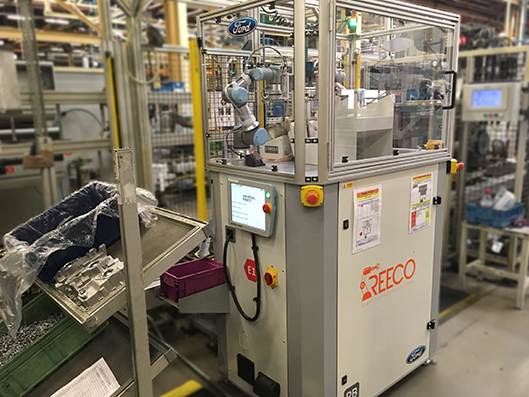 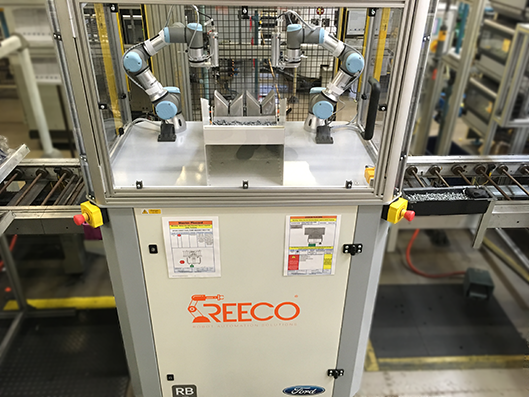 Project #2
Similar to the first project, project 2 is highly repetitive with operators having to hand place hundreds of bolts every day. The process see’s operators manually place 15 bolts into the engine part before pushing a button which tells the conveyor its ready to continue down the line before presenting the operator with a new part.

After an effective first deployment two more UR3 Cobots were deployed to assist Ford with the placement of bolts within a section of their diesel engine production. The dual UR3’s proven track record meant that for small load and close quarters tasks like this, their size, speed and ability to work in tandem allow them to complete the process quickly and effectively. The station is part of a smaller subsection of Ford’s diesel engine production, in which the parts are produced before being sent down the line to be processed further – the first stop down the production line is Reeco’s Cobot station. Once at the station the Cobots will feed 15 bolts into the parts, and with two arms working simultaneously this process is completed quickly. The Cobot arms are fitted with bespoke end of arm tooling which act as both a magazine and a dispenser for the bolts, holding 7 and 8 bolts respectively. To utilise down time, when the Cobots are finished feeding bolts into a part they will replenish their magazines to ensure they are ready to process the next part as soon as it arrives at the station. The magazines are assisted by a bowl feeder which holts 8000 bolts, limiting the need for human intervantion for long periods. The bowl feeder ensures that bolts are orientated correctly before dropping them one by one into a dispenser which holds the bolts until the magazines are ready to receive them. This design was custom built by Reeco to ensure the continuous supply of bolts to the Cobots as well as aiding in the improved cycle time. 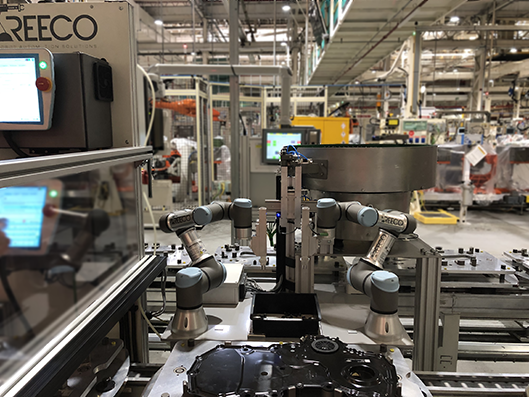 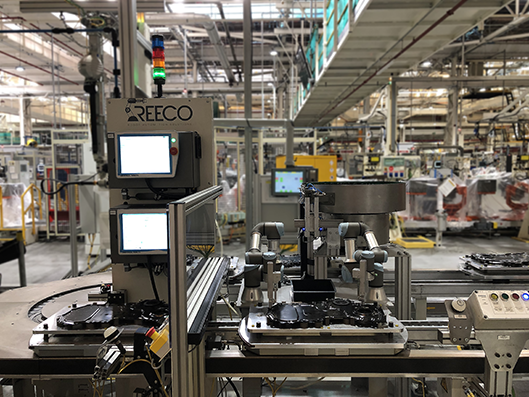 Results
After integration these applications have provided Ford with growth opportunities within their UK operations. It’s proven that when factories implement automation solutions they receive a productivity boost, this remains true for Ford. The improved bolt fixing processes have resulted in the need for additional staff further down the production line. Further to this, Ford’s original needs were met with there being a reduction in RSI opportunity after the elimination of repetitive manual work within these areas.

Value Added To The Process